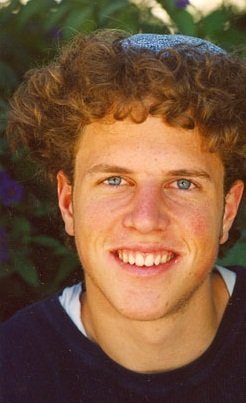 Tani is survived by his parents, Maggie and Jerry Goodman and 4 older siblings and their families: Dvorah and her daughter Anaelle; Micah and his wife, Zippy and 2 daughters, Avital Hodaya and Shiri Netanel; Yael and her husband, Justin Korda and their 3 children, Noam Ben Zvi, Talya Shoshana and Nadav Netanel; Avichai and his wife, Inbal and their daughter Ayala Or

Tani’s short life ended in tragedy while he was in the 12th grade, age 17. On Saturday evening, February 2, 2002, (02.02.02) while away for Shabbat in the yeshiva of Maale Gilboa, he was caught in the electric security gate at the entrance to the community

Seriously injured, he was taken to the “Emek” Hospital of Afula. Tani fought for his life for 5 days, surrounded by family and friends. However his injuries were critical and he died on February 7, 2002  . Tani’s family decided to donate his organs after his death, saving the lives of four individuals and giving the gift of sight to two others

The first Tani Run was November 20, 2002, on Tani’s birthday. This yearly run celebrates Tani’s birthday and is a happy gathering of family and friends. Together with devoted friends who volunteer and those from the “Masuot” scouts troop, is a not-to-be-missed event with runners from clubs all over the country

Tani’s legacy of helping others, his love of sports, his love for his friends and family and love of Torah studies is continued by his family and friends through the work of the charitable foundation established in his name, The Tani Fund. May his memory always be for a blessing.